A murder 50 years ago rattled Chapel Hill’s Black community, laying bare the college town’s persistent inequality. As the university renames a slate of buildings on campus, it’s time for its historical reckoning to expand to its relationship with the town around it.

For decades, our cousin’s public murder was hardly talked about except among our family and friends.

It happened at the heart of the campus of North Carolina’s flagship university. Police left our wounded cousin to bleed on the bricks. Members of a white supremacist motorcycle gang were charged. His murder made headlines in The New York Times, and the Associated Press followed the story.

Yet when an all-white, Orange County jury said “not guilty,” a collective amnesia set in upon the vast majority of Chapel Hill. Until recently, as his story has reemerged locally around the 50th anniversary, you’d have been hard-pressed to find many white people who remembered the once-high-profile murder, let alone the name James Cates.

If he died today in the manner he did in 1970, you’d be hearing “James Cates” on national television, with hashtags on social media and protests in the street. But we lost James Cates well before it became common for Black victims’ names to echo in the broader public’s consciousness.

We have not forgotten though.

Valerie was 14 and attending a slumber party that night in Northside, a historically Black community. After stopping by a neighborhood dance, Valerie and her friends walked down Franklin Street, but because the girls’ parents didn’t allow them onto campus, they returned home and played records until the host mom had heard enough.

Early the next morning, that mom came in to tell Valerie she needed to go home right after breakfast. A family member of Valerie’s had been killed, she said. She thought it was “Baby Boy,” as so many affectionately called James Cates.

Nate was a few years older than Valerie and working in UNC-Chapel Hill’s Student Union Snack Bar that night. There’d been another late-night dance there. Students had planned it as a purposefully interracial affair, and while only 2% of UNC-CH undergraduates then were Black, plenty of young, local Black people came.

Outside the doors just after 2 a.m., a large fight broke out around The Pit between members of a motorcycle gang called the Storm Troopers and Black youth. Several minutes of chaos ended when James Cates, 22, fell to the bricks with two stab wounds. 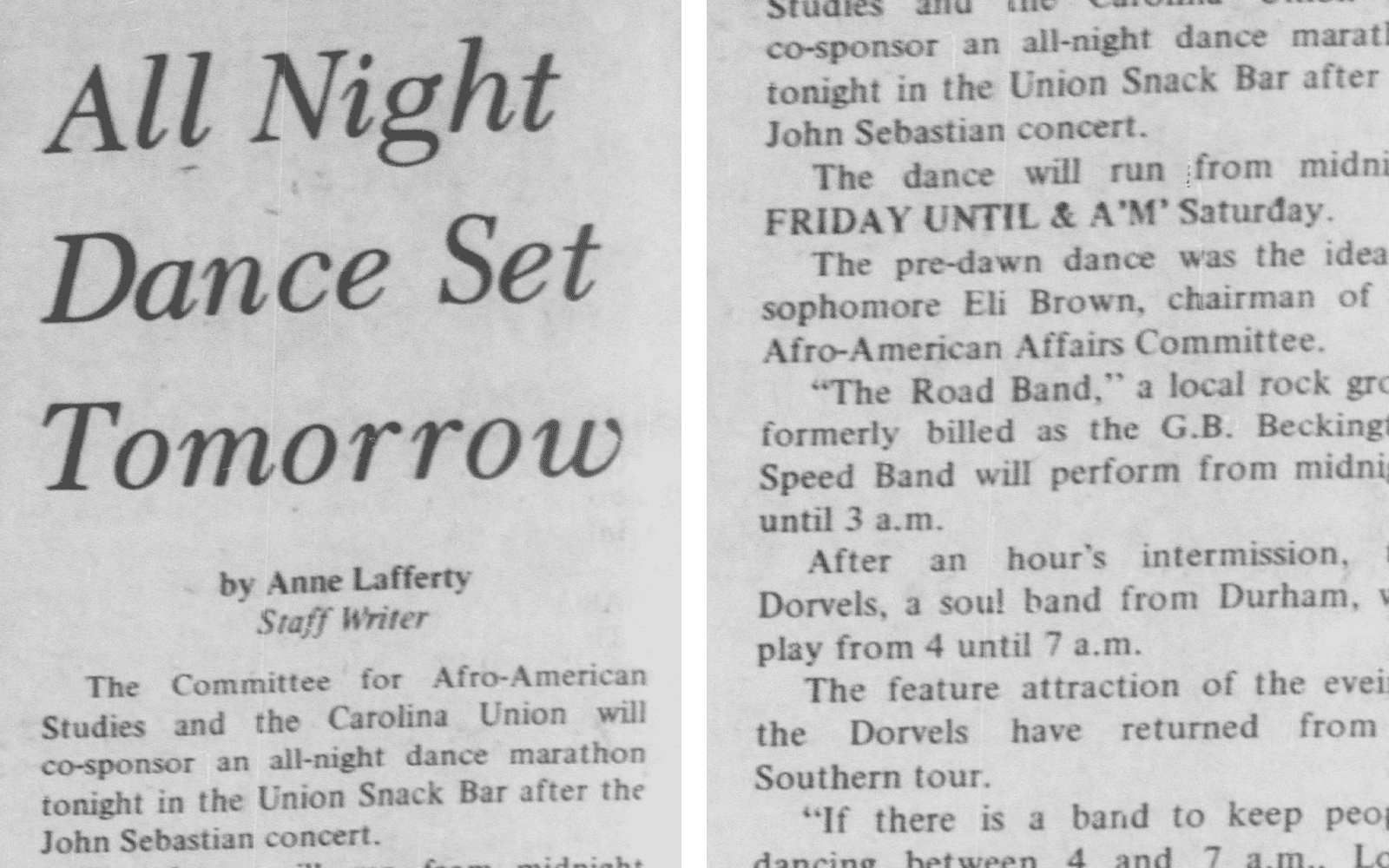 The Storm Troopers were based in Durham but had strong ties to Chapel Hill and were frequently around. While they might not have been emblematic of the town, the Chapel Hill we experienced growing up wasn’t the welcoming “Southern Part of Heaven” most imagine either.

We learned well not to look white folks in the eye on the street. We had to enter restaurants through back doors to pick up takeout. Once when Valerie was a girl, she and a friend walked through a dining room to get barbecue sandwiches and the white patrons froze mid-meal in disbelief.

It wasn’t just the businesses, which the town wouldn’t integrate, despite years of sit-ins and marches, until forced to by the Civil Rights Act of 1964. James Cates attended all-Black schools until his senior year when Chapel Hill High School fully integrated in 1966. It took UNC-CH until the 1980s to reach 8% Black enrollment. That share peaked at 10% in the mid-2000s and has slowly declined since. (About 21% of North Carolinians are Black.)

When Valerie enrolled at UNC-CH four years after her cousin’s murder, she realized her community was largely invisible to those on campus, despite providing much of the university’s labor. Into the 1970s, many homes a short walk from campus didn’t have running water; families used outhouses and filled pails of water at local spigots.

Valerie went on to proudly work for the Chapel Hill Police Department for 21 years, starting in 1987. But it took a lawsuit for Black officers to access leadership roles in the department. Black officers were often perceived as lacking the intellect to supervise. The campus police department was also sued for employee discrimination while Valerie was at Chapel Hill PD. Valerie’s future grandfather-in-law had served as one of the first Black officers in Chapel Hill in the 1950s. He could only patrol Black neighborhoods and wasn’t permitted to arrest white people.

Just across the boundaries of our neighborhoods, our fellow townsfolk assumed our side of the street was as sunny as their “part of Heaven.” They didn’t want to see the gap between reputation and reality.

There was plenty of work to do in the area of race relations, and that was the spirit of the campus dance in the fall of 1970.

Nate and James Cates were more than cousins. They were like brothers. And when Nate rushed out of the Student Union that night, he tried to pick up a wounded James to take him to the hospital down the street. That’s how the Black community often responded to medical emergencies. We couldn’t always rely on ambulances to arrive. In this case, police were already on the scene, yet a 20-year-old’s instincts compelled him to assume the responsibility of emergency transport. But the officers stopped Nate from helping his cousin.

Nate borrowed a co-worker’s car and drove just west of campus to the Pine Knolls neighborhood where James Cates’ mother lived. Nate knocked on the door and told her that her son had been stabbed. Then Nate drove to the nearby Northside neighborhood to tell James Cates’ grandmother that the boy she’d raised and still lived with was badly bleeding and unresponsive. Nate drove back to campus. James Cates was still on the bricks. Police were still standing around.

The police had called for an ambulance, which was operated by a private company, but it did not arrive. People who were there complained in the press about the excruciatingly lengthy wait—some said it was as long as 45 minutes, although it’s impossible to know exactly—and noted that the officers showed little concern and didn’t try to help James Cates as dance attendees frantically did.

Finally, police took him to the hospital themselves. James Lewis Cates Jr. died shortly after arrival due to excessive blood loss. The police had allowed the suspects to leave the scene. Later they arrested three Storm Troopers and charged them with murder.

Our cousin should be 72 today. 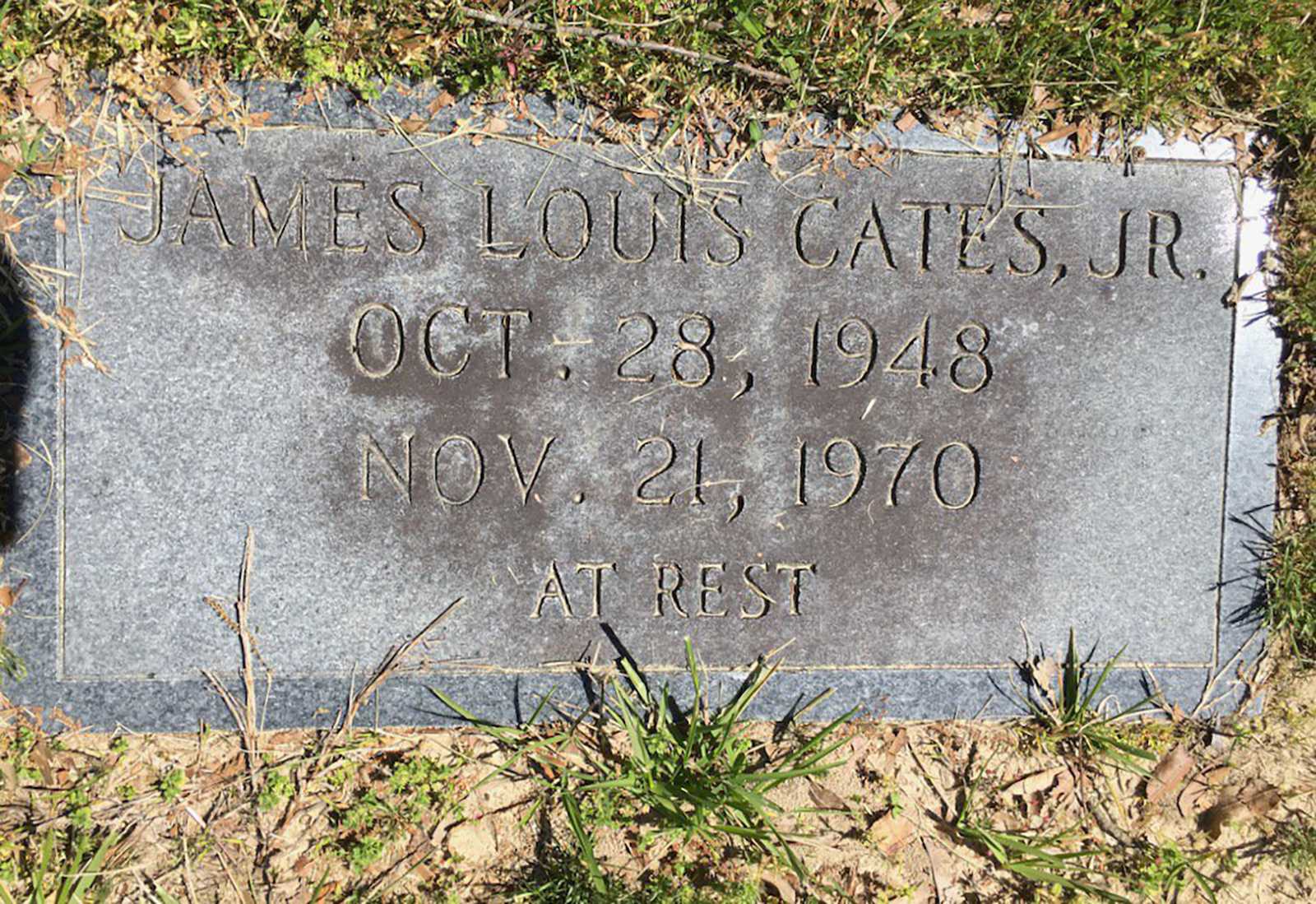 James Cates' gravestone. While spelled Louis on his gravestone, it was Lewis on vital documents and his relatives today say it was Lewis // photo courtesy of the James Cates Remembrance Coalition

In the days that followed, family and friends spent countless hours moving from home to home, gathering as many of us as could fit, seemingly in shifts. James Cates was popular in the community, so our mourning was a shared one.

He was probably the most charismatic of our large group of male cousins. His dimpled smile would light up a room. He was a quick-witted, fast talker who kept you laughing. Everyone would simply sit back as he entertained the room.

That he could’ve been stabbed so close to a world-class medical facility, with law enforcement present, yet not receive life-saving care—it rattled Chapel Hill’s close-knit Black community. What happened to our cousin wasn’t shocking. But it laid bare for the community the reality of our place in town, despite the hard-fought gains of the 1960s.

Four years later, Valerie enrolled at UNC-Chapel Hill. Each time she walked near The Pit, she was reminded that James Cates was killed right there. Even though his blood had been quickly washed away that night as the next day’s home football game approached, and the crime scene was not investigated, the memory of the atrocity could not be cleansed. For as with Adam in the Book of Genesis, James Cates’ blood cries from the bricks and cement, even to this day. 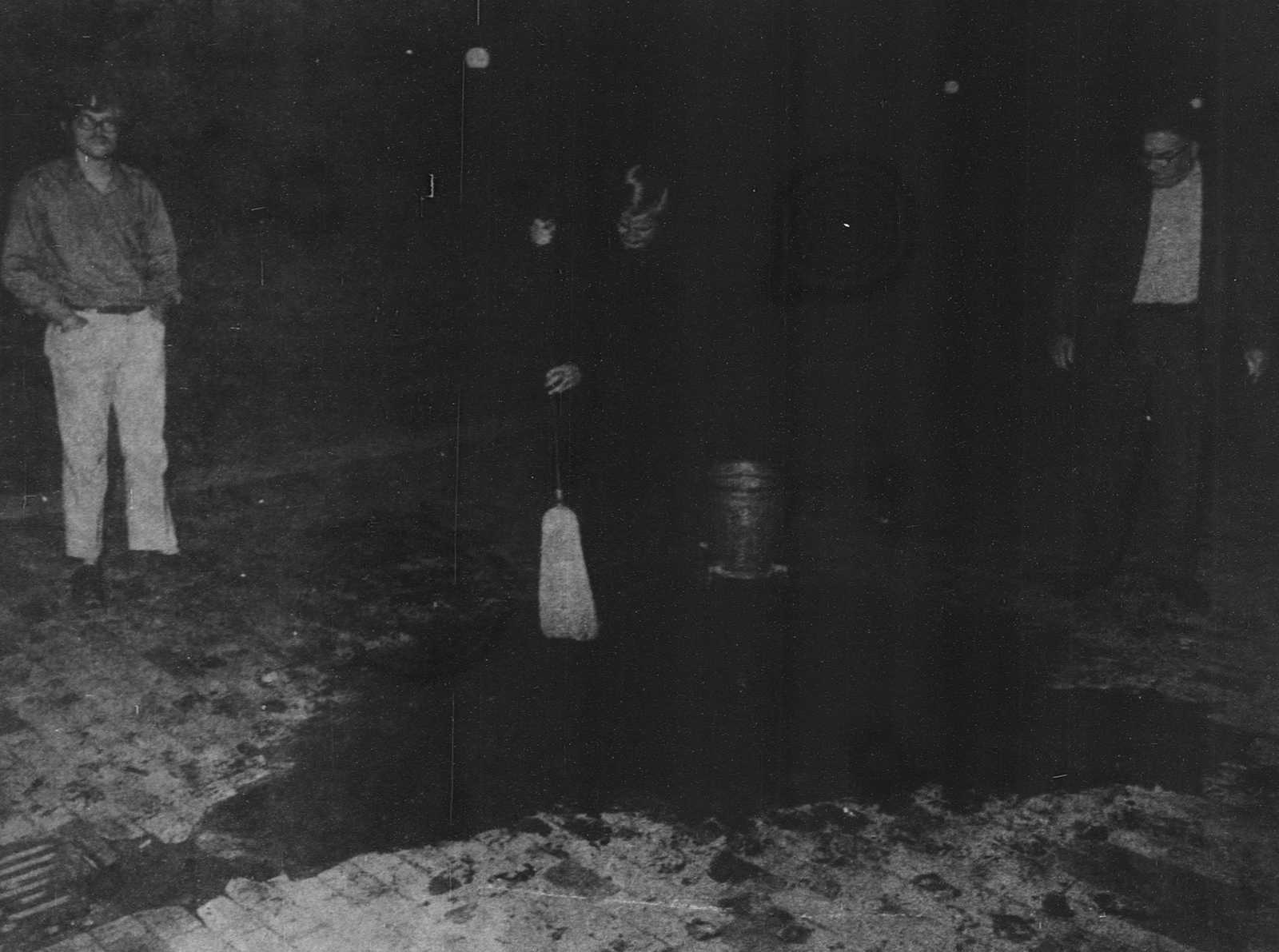 Last November, on the 50th anniversary of his death, we announced the launch of the James Cates Remembrance Coalition. Partnering with scholars from UNC-CH, Duke, the town of Chapel Hill, the community, and local public schools, the coalition is researching, documenting, and sharing the history around James Cates. Kevin Guskiewicz, UNC-CH’s chancellor, and Pam Hemminger, the town’s mayor, both publicly endorsed the group’s ongoing work. We are appreciative of that support. But more needs to be done. 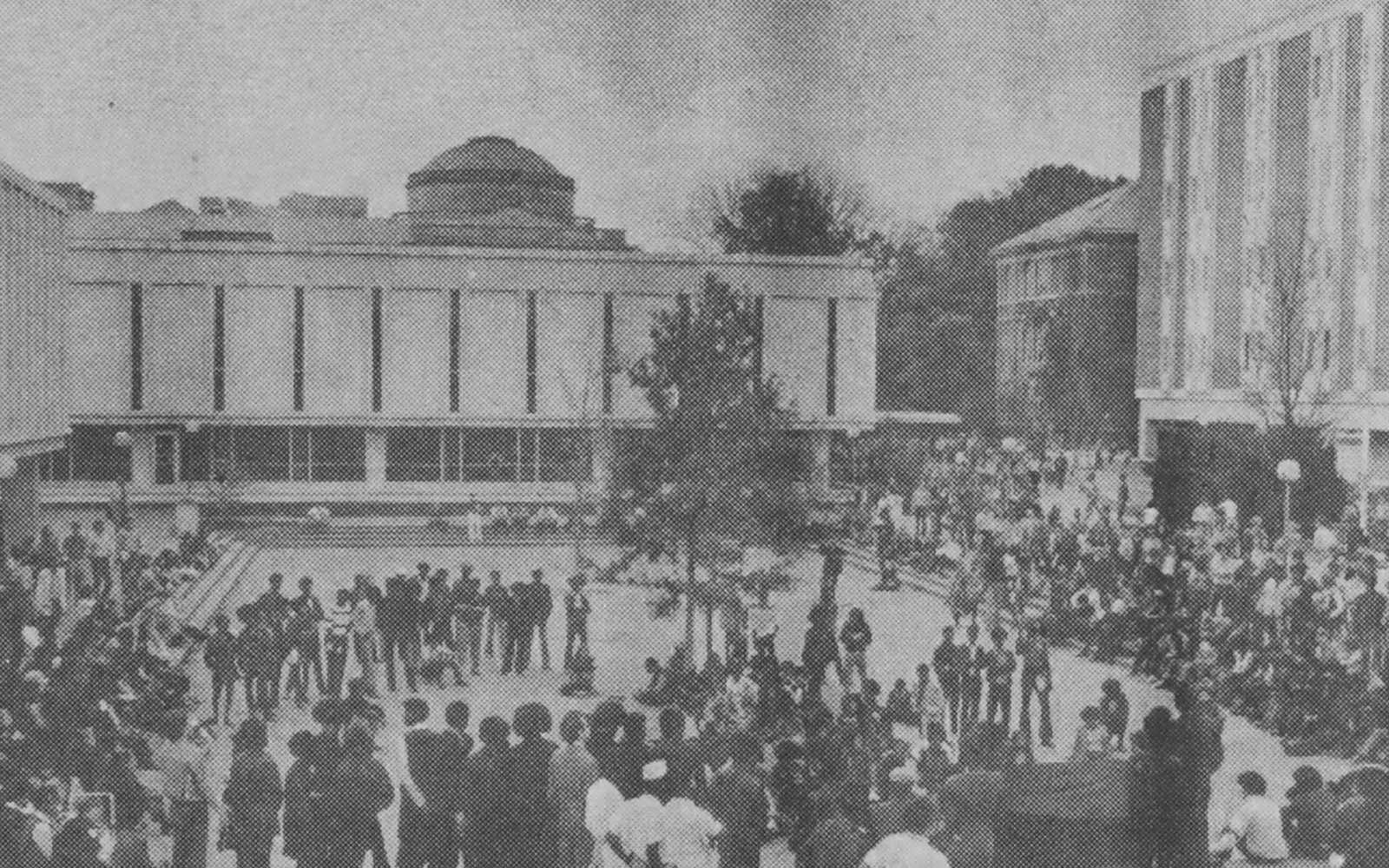 James Cates memorial, at the Pit on UNC-Chapel Hill's campus. The Student Stores building is off to the left of the image // photo credit Black Ink 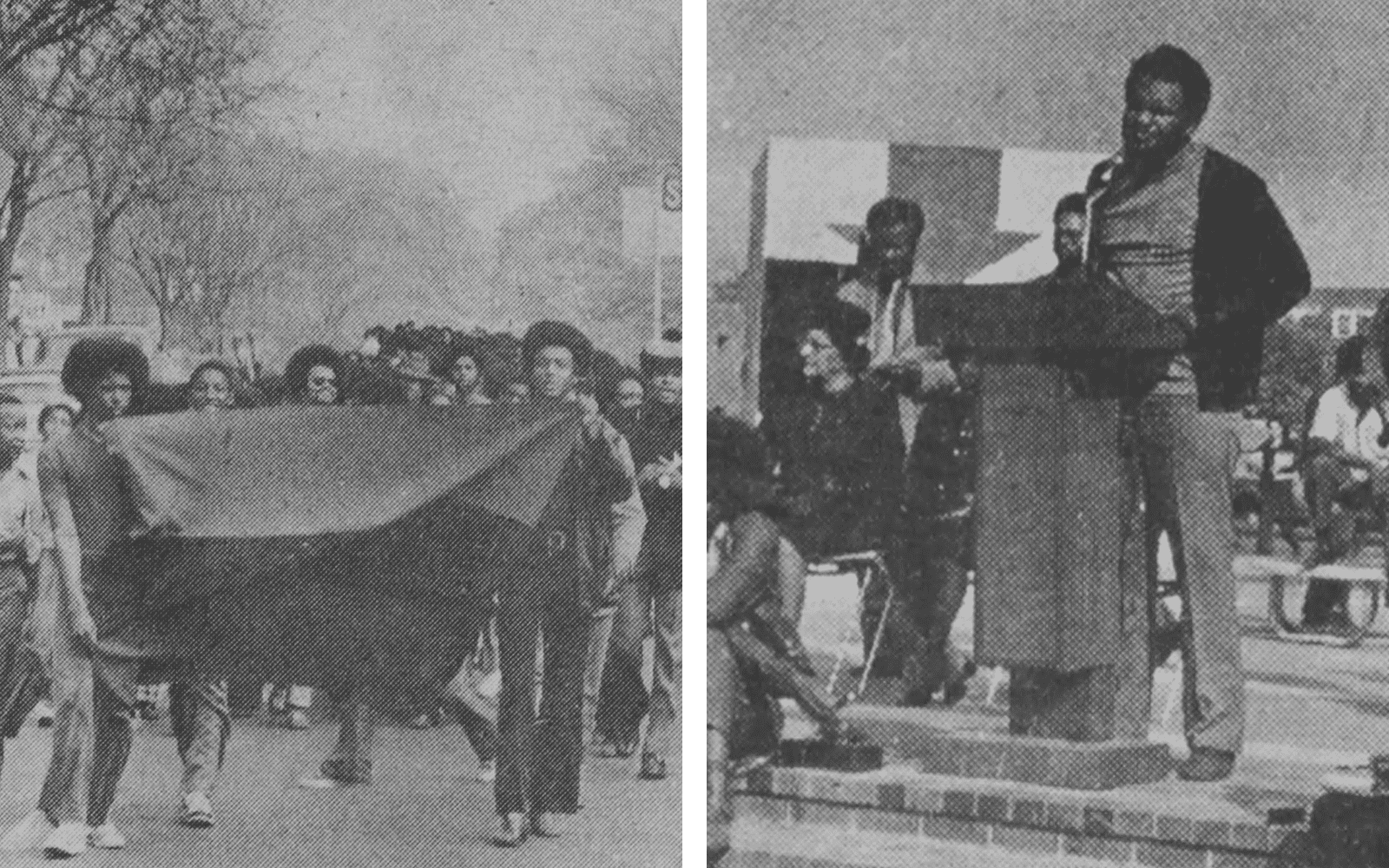 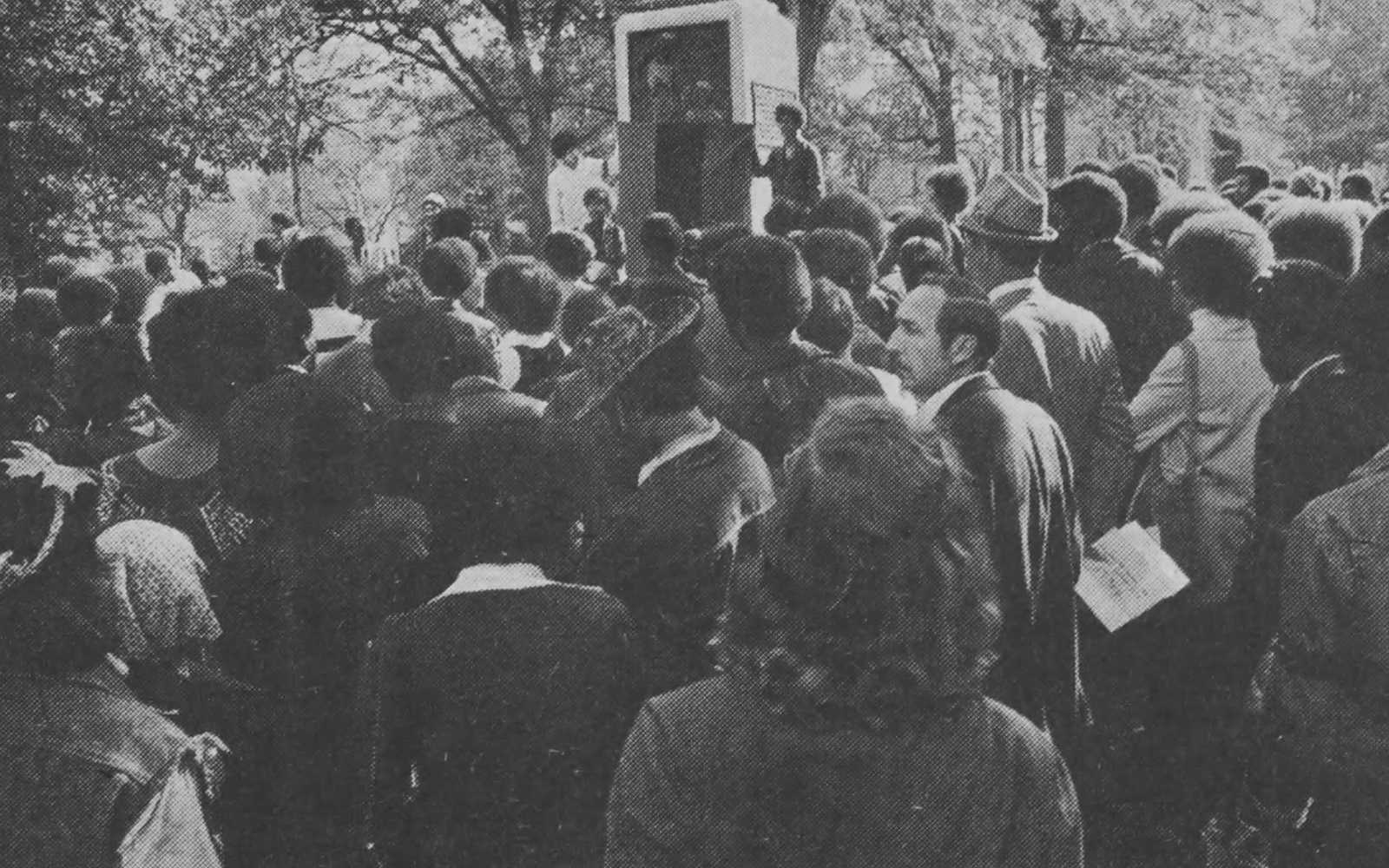 A James Cates Memorial, next to the now removed Confederate Statue, on the campus of UNC-CH, November 1971 // photo credit Black Ink 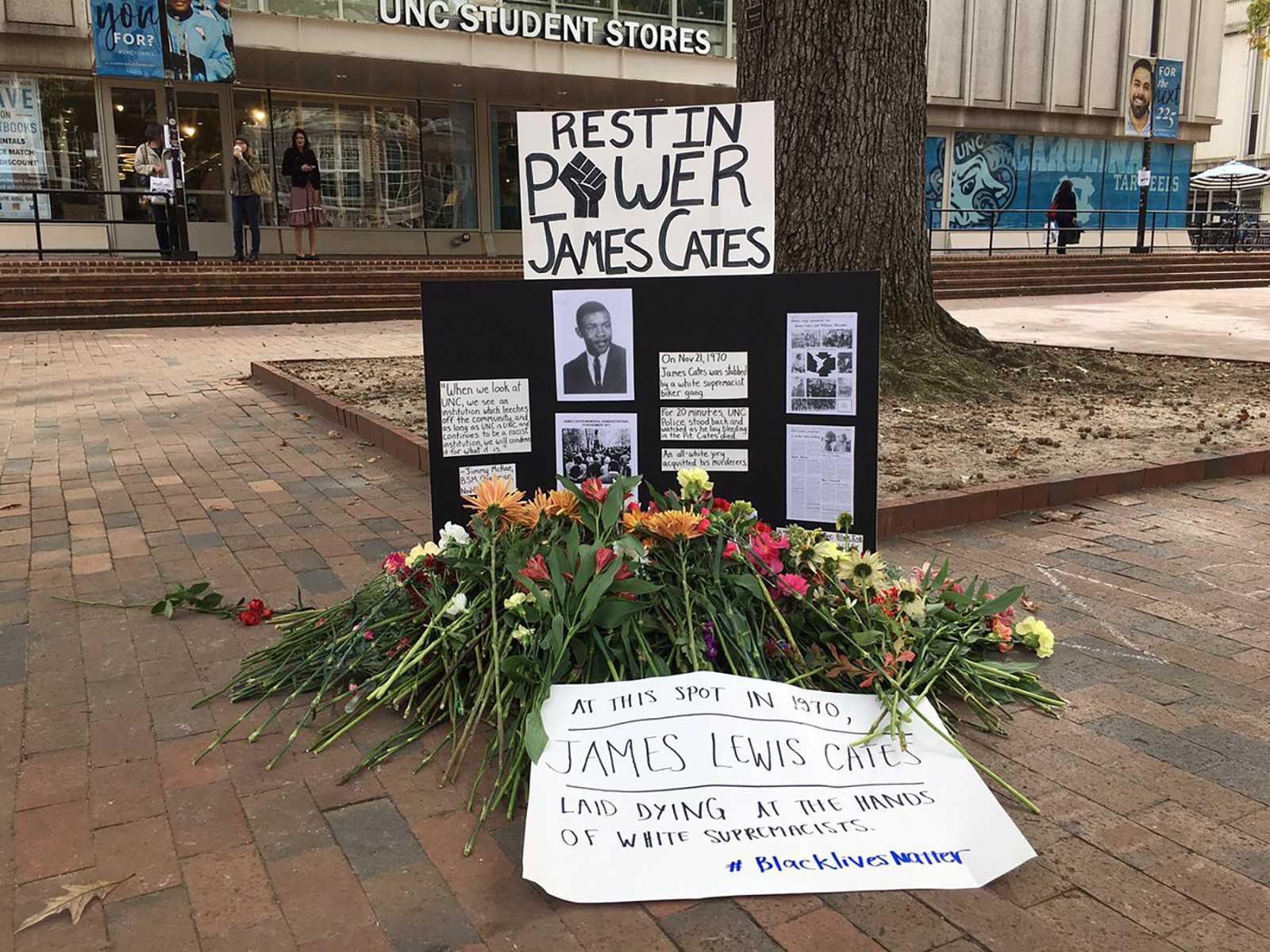 A modern-day tribute to James Cates in the Pit. The Student Stores building is in the background // photo courtesy of the James Cates Remembrance Coalition

A building that sits next to The Pit was recently stripped of its white supremacist namesake, a man who helped foment the Wilmington Massacre. The building, which houses the university’s Student Stores, wasn’t the only building on campus to shed its name, and it’s unlikely to be the last.

This spring, there was an open call for name suggestions for three now-unnamed buildings. The University Commission on History, Race, and a Way Forward has recommended the removal of names for nine more. Dozens of community members submitted James Cates’ name. The advisory committee is tasked with suggesting six possible names for those first three buildings. The chancellor will then send his picks to the Board of Trustees. He has said he hopes to finish this first wave of renamings this summer.

There are many worthy names we would be proud to see on campus buildings, and we do not mean to minimize them. But renaming the Student Stores building for James Cates would be an opportunity for the university to begin to reckon with its relationship with Chapel Hill’s Black community.

Throughout UNC-CH’s history, the local Black community has been closely bonded to the nation’s first public university. The community that raised and loved James Cates has been a major source of campus labor since the first cornerstone was laid in 1793. Descendants of people who built the university’s early buildings—who tended to students, professors, and administrators for generations while both enslaved and free, as well as during our lifetimes—still reside there.

James Cates’ own paternal grandmother worked for UNC-CH ironing clothes at the University Laundry, which was a segregated workplace until 1968, two years before her grandson’s murder. 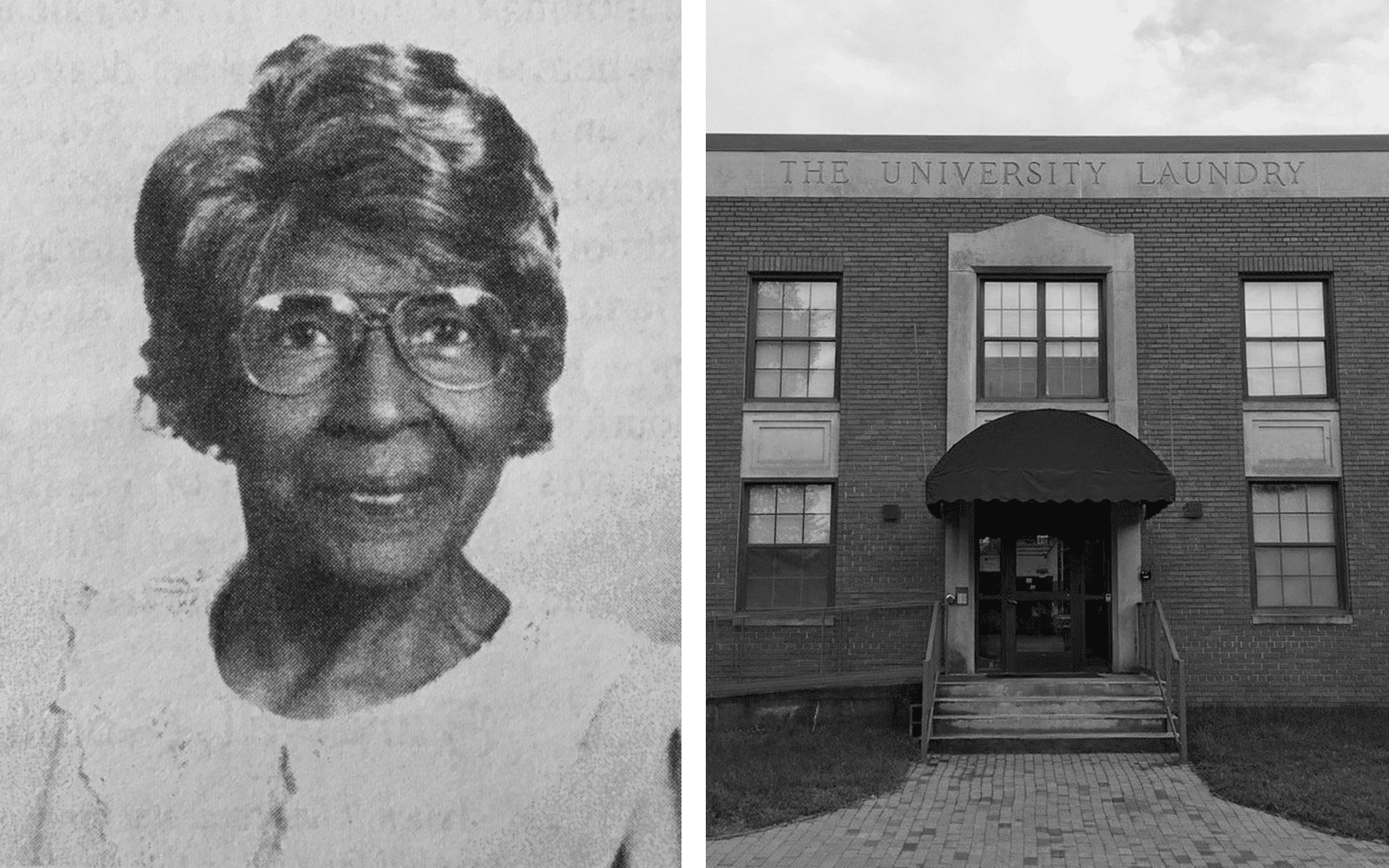 James Cates' grandmother, Annie Cates, and the campus building where she worked // photo courtesy of the James Cates Remembrance Coalition

The Pit outside of the Student Stores building is not only where James Cates was allowed to die. It is the town square of this state’s flagship university campus. Students, faculty, staff, community members, and visitors all converge and mingle there.

By naming the Student Stores building in remembrance of James Cates, the university has an opportunity to demonstrate that it’s ready to be a better community partner. Its leaders can make a bold statement that UNC-CH intends to honestly face its past relationship with the Black community of Chapel Hill.

We believe creating the James Cates Building is a necessary step of acknowledgment for what happened and for the university’s and its police force’s role in his death. Only by adequately acknowledging can we begin to reckon. Only by reckoning can we reconcile.

UNC-Chapel Hill has a long road to travel on that journey, and James Cates Building would be a big step.

Valerie P. Foushee, a first cousin to James Cates, is in her fifth term as a North Carolina state senator, representing Orange and Chatham counties, after retiring from a 21-year career with the Chapel Hill Police Department.

Nate Davis, a first cousin to James Cates, is the retired longtime director of the Hargraves Community Center for the town of Chapel Hill.

More information on James Cates can be found on the website for UNC-CH’s Center for the Study of the American South.